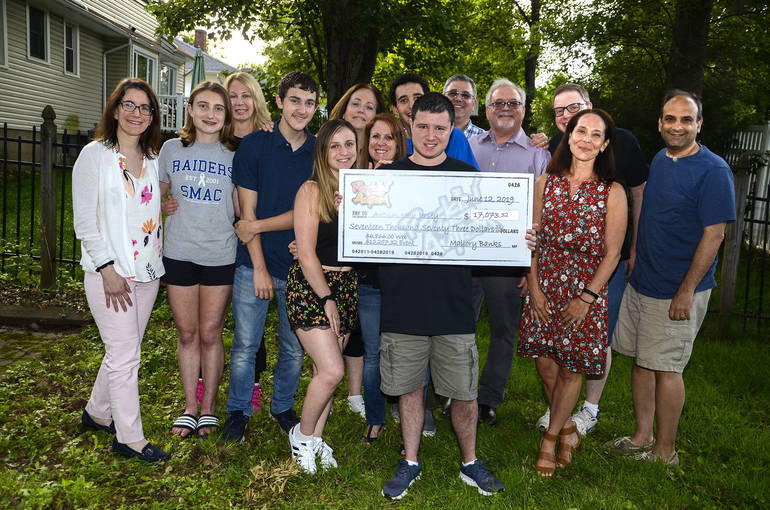 Supporters and friends of Rockin’ for Autism gathered June 12 in Fanwood at the home of the Banks family to celebrate another successful event. The annual festival, which took place April 28 at LaGrande Park in Fanwood, raised $17,173.32 for Autism New Jersey.

“Year upon year, the event never disappoints.  We marvel at the dedication of the entire Rockin’ for Autism organizing committee, led by the Banks Family, for their tireless efforts,” said Ellen Schisler, associate executive director for Autism New Jersey, who was presented with a check during the gathering.

Rockin’ for Autism was created by Mallory Banks in 2011 as a simple bake sale to honor her older brother, Ethan. It has developed into one of the highlights of the spring community calendar in Scotch Plains and Fanwood, with multiple musical acts, a variety of vendors, and a Child’s Play Challenge Course, among other attractions. Thanks to Mallory, now 17, and her family, the event has raised nearly $70,000 since 2011.

This year’s event was headlined by the BStreet Band, a Bruce Springsteen tribute band, and attracted another large crowd, despite less-than-perfect weather.

“As the festival keeps growing, we continue to add more music, food, activities and attractions so that there’s plenty to do, see and hear all day long as we raise awareness and funds for a great cause,” said Jeff Banks, Mallory’s father and co-chairman of the event.

Mark your calendars:  Next year’s event is scheduled for Saturday, April 18, 2020.